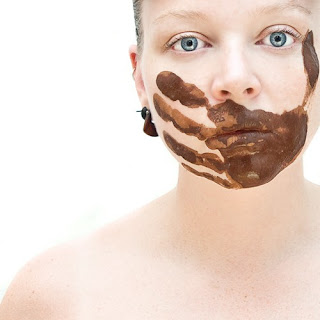 Quiet the voices within, by Canadian artist Susan Knight, is one of hundreds of self-portraits taken over a five year span.


The small photograph, measuring five by five inches, is part of a ‘self-portrait a day’ project—an idea started somewhat vicariously by Roman Opalka with 1965 / 1 - ∞. The concept was perfected by Karl Baden’s Every Day project and made popular through the likes of Noah Kalina.

Knight, a trained interior designer and self-taught photographer from Medicine Hat, Alberta, creates what she calls interpretive self-portraiture—portraits for which the sitter, here the artist, reenacts a part or represents a persona. Many of her photos are highly decorative as Knight employs costumes, props and heavy make up.

Quiet the voices within, along with three other works belonging to a small series entitled Left and Leaning, differs significantly. The background is blank, the costume is missing and Knight’s fair skin is interrupted only by her bright eyes and (of course) the chocolate marks of a hand.

The photograph is both playful and contemplative. “It is less about someone external trying to silence me,” confirms Knight “than it is about me trying to silence my own thoughts. Specifically thoughts of inferiority or not belonging.”

Like the works of Opalka, Baden and Kalina, this photograph marks not only the result of a daily task, that of having to shoot a self-portrait each day; it becomes a work of self-reflection.

"The self-portrait is the artist's most personal form of expression. It is the ultimate means of self-analysis, pre- senting an opportunity for self-reflection, self-expression and self-promotion; a bid for eternity."
Liz Rideal
This is a collection of self-portraits. The aim of the blog is to bring artists’ own images together from across periods, styles, and places. The self-portraits are purchased online, from galleries and art schools, found at garage sales, donated, or bought directly from the artist. A new self-portrait is posted every few weeks.